Dodge will stop manufacturing new Vipers in 2017. This is sad. Sad because it signifys we care too much about safety, creature comforts, fuel economy and avoiding bleeding ear drums.

For those of you who don’t know, the Viper was pretty much the drunken-bar-napkin idea of Carrol Shelby, the dude whose name is on the back of all the REALLY fast Mustangs, and Bob Lutz, the guy who went by the name of “Maximum Bob” and flew a helicopter to work. Like, he flew it himself. Certified Badasses, right? Manual transmission only and a “go big or go home” 8-litre V10, 2-door coupe.

For the first couple of years, these cars didn’t even have windows or roofs – those were dealer options. The exhaust exited just behind the seats through side pipes, amazing for sound quality, and terrible for people who don’t like having a thermal heater under their butts, or third degree burns on their legs when they accidentally touch the exhaust getting out of the car. Technical specs and perks? None. How do you feel about driving a V10 torque monster with no ABS or traction control? Sounds fun, right? That’s what made this monster such a thrill to drive – like dancing with the devil. It is exhilarating until you step on the devils foot. Then you die and your insurance company spits on your still-twitching corpse. Bringing a Viper to a party is like doing surgery with a shotgun.

Sergio Marcheone, the sweater-loving dark overlord of Chrysler announced that 2017 would be the final production year for this ridiculous car. Squarely to blame are weak sales and rising life insurance rates for owners. That makes me sad. It makes me feel like the car community is losing a great car. It makes me wonder what “we” – the well intentioned car nut – will be buying. Do we no longer car for a car that forces you to hone your skills or risk winding up in a ditch? Are we relying too much on fancy-dancy electronic aids to make us go faster and stop shorter?

Yeah the viper is loud, obnoxious, hot, cramped, hard to control, and really bad on fuel. If it weren’t, more people would have bought it. This was a car that was built around an engine…and everything other than the engine was an afterthought. Oh, yeah, I guess we need seats…make them weatherproof because we don’t want to put windows or a roof on the thing. The seats were not weatherproof and most of them smell like pee for good reason. If a car guy built a car and did not care about what the bean counters said, the Viper would be it.

Alas, fair thee well, beloved Viper. I wish you nothing but sunny days at the track and steeply appreciating value.

Powel Crosley Jr. was quite an interesting person. A renowned industrialist who originated from modest beginnings, he was just old enough to drink (legally) around the turn of the last century. Crosley was obsessed with manufacturing processes and always looking at ways to build things cheaper and more efficiently.

Don’t worry, we are getting to the car part.

Crosley made a pretty comfortable living selling automotive accessories in the early 1900’s. Picture it, an “accessory” on a car with no doors or roof? Maybe he invented the fuzzy dice you hang from your mirror… Anyways, this parlayed into him developing radios.

Rumor (Wikipedia) has it that he took his son to a store to buy a radio and couldn’t believe they cost over $100. He did what all of our resourceful grandfathers would have done and bought a book on how radios work. Fast forward a couple of years, and he was manufacturing them at $7 a pop. Take that, price gouging!

Not enough people bought his radios, so he started his own broadcasting company as a way to promote his radios. That would be like Ford making its own brand of motor oil to promote its cars. Wild, but it worked…well enough to make him very wealthy.

Fast forward to the Great Depression and this guy figures out a way to keep food cold in a fridge that doesn’t use an engine. Crosley also has the dubious distinction of being the first person to put shelves in a fridge (again, thanks Wikipedia). Think about it, while other companies were dropping like flies during the Depression, Crosley’s business was flourishing. Crosley made refrigerators and other household appliances, along with radios well into the 1960’s, thanks to their popularity in the 30’s.

Now, Crosley always had a thing for cars ever since he sold the first hula girl through his automotive accessories company. Then He convinced his younger brother to help him build a car. In classic Crosley fashion, his cars achieved 50 miles per gallon at a time when people literally didn’t turn off cars during the winter because they were too hard to start back up. Even cars today don’t get fuel economy like that. Oh, and that single overhead cam engine you’re driving? Thank him. He pioneered it.

Like Crosley, his cars went against the grain. They were not popular by any stretch of imagination. They were not bad cars, just cars that were small and good on fuel when everyone was buying chrome by the ton and cubic inches like they were lottery tickets. A classic case of great product, but wrong time.

I completely forgot about Crosley until a buddy called me a couple of weeks ago. His friend was renovating his basement and said I could have the cool vintage fridge in the basement if I dragged it out. Not one to turn down someone else’s trash, I jumped at the chance to inherit a musty fridge that probably didn’t work. I went over with payment (beer) in hand only to be overjoyed that a) the fridge move didn’t involve stairs, and b) said fridge is actually a Crosley from the late 1950’s! 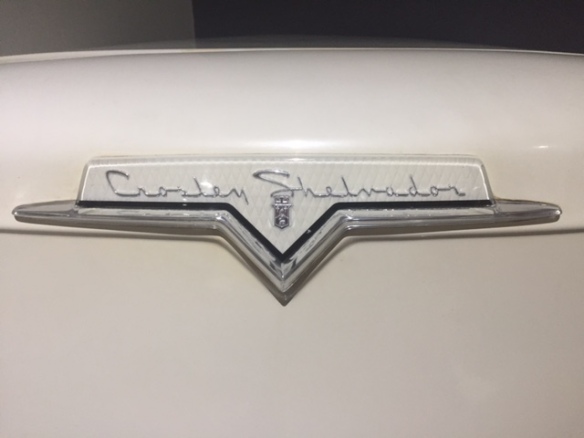 What a piece of automotive history! It was way too good to keep for myself, but I knew my wife would kill me if I showed up with a dank fridge that did not work. So, I donated it to the office where it happily is enjoying a new chapter in our boardroom. It keeps our office supplies…luke warm.

Error: Twitter did not respond. Please wait a few minutes and refresh this page.