WHAT IS THIS EVENT?
The AUTO|ONE Group invites you to celebrate the opening of our new showroom. It promises to be a fun evening featuring fine cars, German beer & wine, traditional German food from the Alpen Club, live Oom-Pah Band and some other surprise activities. Lederhosen & Dirndl Optional!

We are located just steps away from the Marine Drive Skytrain station on the Canada Line.
Complimentary valet parking will be provided.

WHY ARE WE DOING THIS?
TICKETS WILL BE SOLD FOR A CHARITY DRAW TO WIN PRIZES,
PARTICIPATE IN ACTIVITIES AND PURCHASE SOUVENIRS.

All proceeds from ticket sales will be donated to the SUNSHINE FOUNDATION.

Friends and family are welcome, please identify the number of guests in your RSVP.

I got a phone call from one of my best friends the other week that went something like this: “hey Sam, a bunch of us are going to Brighton Speedway next weekend for some races, you should come” Oh Brighton, The epicenter of back country motor sports and ridiculous racing ideas. My response was something along the lines of “I will see if I can make it out, it’s a bit of a hike from Toronto and I’m not sure if the wife will appreciate the country “culture” that is a day of racing in Brighton.” All I really wanted to do was sit on the couch and catch up on T.V.-Then my friend told my there would be a school bus race. It took all of 2 seconds for me to confirm that I was going to the race. Let me explain what was involved in a day of racing at the Brighton Speed way. We will only focus on a couple of these races because I have been told that my blogs are too long and bla, bla, bla…

1)       endurance races: Picture 64 cars racing around a tight, dirt oval track with high banks in the corners. The cars race in three heats. The top place finishers get to move on to the final event- the demolition derby. The cars that race these are “race prepped” and by that I mean they have no glass or lights and crummy paint jobs done with a spray paint can or paint brush. I will summarize an endurance race like this: picture everyone racing around a track in cars that are not fit for the road. Now picture them intentionally hitting each other and trying to knock each other off the track. You have to be pretty fearless to win one of these events. The winner was 16 years old and had clearly not yet felt the sting of aching bones the next day.

2)      Trailer race: This pretty much the exact same thing as an endurance race except everyone has to have a trailer on the back of their vehicle. The trailer is still considered a trailer as long as the tongue is attached up to the car. These trailers are hooked up to cars destined for the demolition derby so scratching the paint is okay. In fact there are extra laps added on to drivers that don’t trade pant. The object is to try to take out your opponent and their trailer. OH THE HUMANITY! These trailers are all in varying states of decay and most have been loaded up with garbage and unwanted household furniture. This is done to try and destroy the tires on the car behind it and make the track that much more dangerous. The old a-barbecue-is-going-to-fall-out-of-the-back-of-my-trailer-and-onto-your-hood trick is the most advanced maneuver in Motorsports racing today.

3)      Vehicle long jump: This is an open class for anyone to partake in. It is also the single largest business producer for the local chiropractic clinic. Contestants take their post endurance cars but pre-demolition derby cars and launch them off a 2 and a half-foot ramp to see how much air they can get. No landing strip, just dirt, flat hard-packed dirt. The winner is the person who jumps the furthest. I think I saw one contestant cough up a vertebrae in a Buick Century. On a side note, the sound these cars make when they land is somewhere between the dull thud of dropping a bowling ball on wood and running over a tin can. 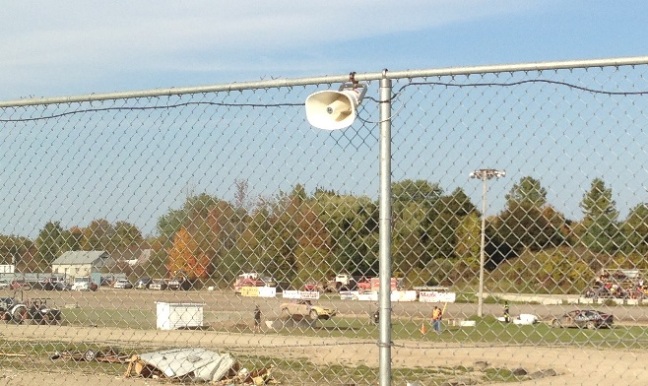 4)      School bus race: OH. MY. GOD! I was expecting short buses. I got full-sized old school International, Ford and G.M.’s! The majority of them  run big block American motors. The buses that run the original diesel mills puff out thick black smoke. These buses are unbelievable. If you have never seen cheese-wagons smash into each other while trying to negotiate a tight, angled turn on a dirt track you have never lived. These guys are ruthless. And it shows. Buses went off the track, spun out and crashed. These are 70 foot logs rolling around they are loud, top-heavy and unstable. They have so much real-estate on top of the old school ladder frames that you can aim to hit. The track is not that wide or accommodating in corners, So much contact happens between these buses. You would could almost relate it to watching whales engage in a pre-mating ritual. If you get the chance, go see a bus race it will make you reevaluate your priorities.

5)      Demolition derby: This was the main event and it devided into compact cars and full size cars. The cars are placed in a small area bounded by concrete blocks. What ensues when the checkered flag goes up is madness! Everyone try’s to eliminate everyone else’s car by smashing into it. I spoke with a seasoned demolition derby veteran and he explained that there are 2 ways to win a derby. To win the compact class (the majority of these cars are front engine front wheel drive) you have to smash the front of another car with the back of yours. Essentially you want to inflict as much damage as possible to the front of your opponent’s car (so you can disable the engine) without exposing the front of your car to damage. The full-sized class is the opposite. Most of them are front engine rear wheel drive cars. These full-sized cars are generally pre-crash protection era cars so the front ends are bullet proof. The best bet is to back into the rear side of the other car so you can take out the rear axle and render the car immobile. Most of these full-sized cars have rear ends larger than a 2 bedroom condo in Toronto so there is lots of metal to cushion the blow.  after seeing the carnage unfold I am 100% positive that we should be promoting this event to people with anger management issues. This would not only allow them to take out anger. It would reward those who are most aggressive.

*no animals were hurt in the making of this blog, however approximately 70 cars, 6 trailers and 9 buses were destroyed*

AUTO ONE Leasing took part in the nation’s finest two day outdoor showing of Luxury & Supercars on a September weekend.  This event offered a unique up-close and personal opportunity to view some of the world’s most important examples of automotive achievements.

Automotive enthusiasts of rare luxury supercars, vintage collectibles, electric/hybrid and concept cars got the chance to view these fine specimens all in one outdoor place.  The event took place on the manicured great lawn of the Van Dusen Botanical Garden, offering the perfect backdrop.   This show is one of the most anticipated automotive, lifestyle and fashion events on the Metro-Vancouver social calendar. 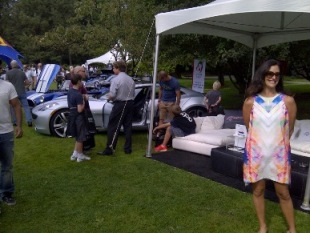 Our booth featured a taste of both the classic & modern automotive lifestyle having a 1965 AC Cobra as well as a 2012 Fisker Karma Electric car on display.  The weather was looking undecided at one point but thankfully turned out to be a beautiful day.  We had many clients and friends come visit our booth and rest their feet in our lounge, thanks to the effort of Medina Design Group (www.medinadesigngroup.ca) .  A big Congratulations also goes out to Nico M who won our draw for a free Ultimate Detail! 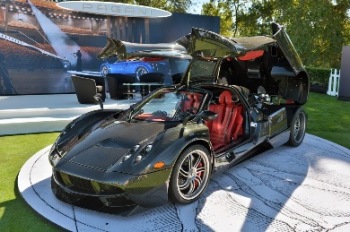 The two most expensive cars at the show were bar none the Pagani Huayra and the Bugatti Veyron. 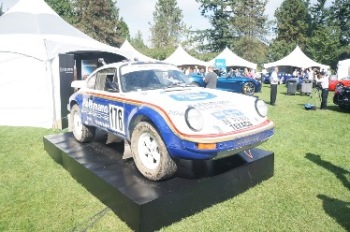 The 1989 Porsche 911 Rothmans rally car was so authentic that instructions were to NOT wash it so as to keep its road worn rally look for display.  There was an attention getting Aston Martin Vanquish replicated with machine guns, front missile rack and a champagne cooler glove box from the Bond movie “Die Another Day”.

All in all, it was a spectacular weekend for to see luxury & super cars.  You can check out a video of the show at the following link: http://vimeo.com/75838496#

Auto|One Group was locked and loaded on Wednesday night! We had our 50 years of James Bond and Porsche event and it was amazing. Our previous event, the 1950’S and 1960’S theme was blown out of the water by Wednesday nights event. We had well over 400 guests celebrate all things Porsche and Bond with us. People came from all over to enjoy our eclectic mix of vehicles, costumes, food, live music, drink and entertainment. 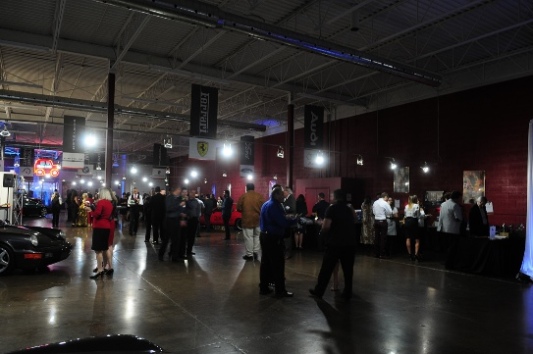 Through the help of a charity casino, live auction and silent auction we were able to raise more than $10,000.00 to help the Mikey Network. For those of you who don’t know (and you should know if you read our blogs!) the Mikey network is a truly fantastic charity. They donate automatic external defibrillators to various businesses and public facilities and provide the necessary training on how to use them. Our guests graciously opened their hearts and wallets when bidding and we could not be happier with the amount that people bid/bet/volunteered towards this epic cause.

In honor of the night we had an entire room transformed into a casino for the night. In it were two Aston Martins, our custom Mercedes C class and We threw in a Ferrari F430 for good measure. of course we focus on the cars first! We also had 3 poker tables, 2 blackjack tables and a roulette table. There was even a martini station complete with a custom 007 inspired Auto|One ice sculpture that poured out drinks.

In the main room we had a Lotus Esprit V8, Land Rover Defender, Porsche 928 race car, Porsche 930 turbo, Porsche 997 C4S, Ferrari 328, Porsche 964 and an immaculate original Amphicar! We also had the band setup, beer and wine station, ice wine from Vice winery and the 50 plus silent auction items.

We would like to thank all of the guests again for coming out to celebrate 50 years of bond and Porsche. We would also like to thank those guests for generously donating to the Mike Network cause.

Error: Twitter did not respond. Please wait a few minutes and refresh this page.